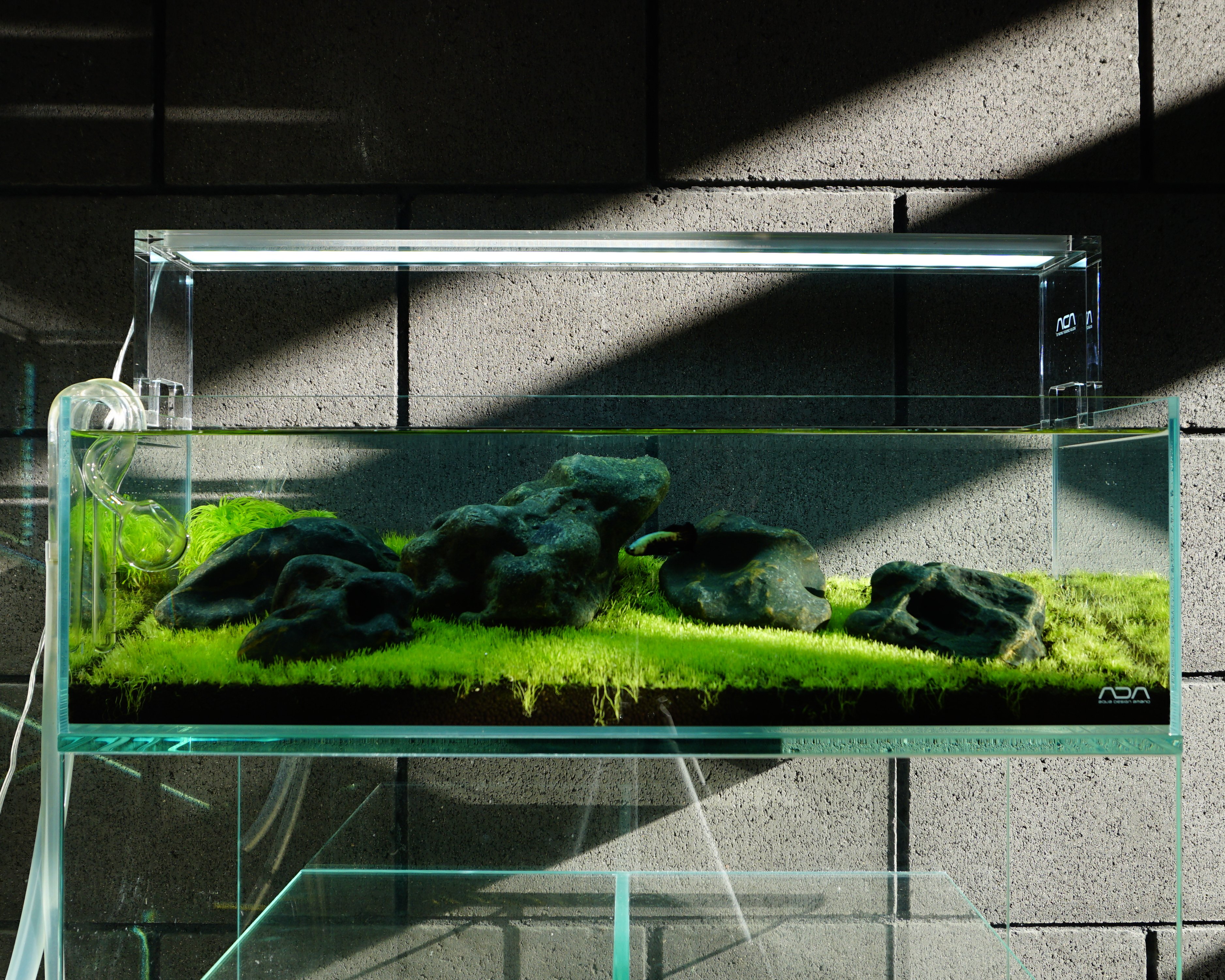 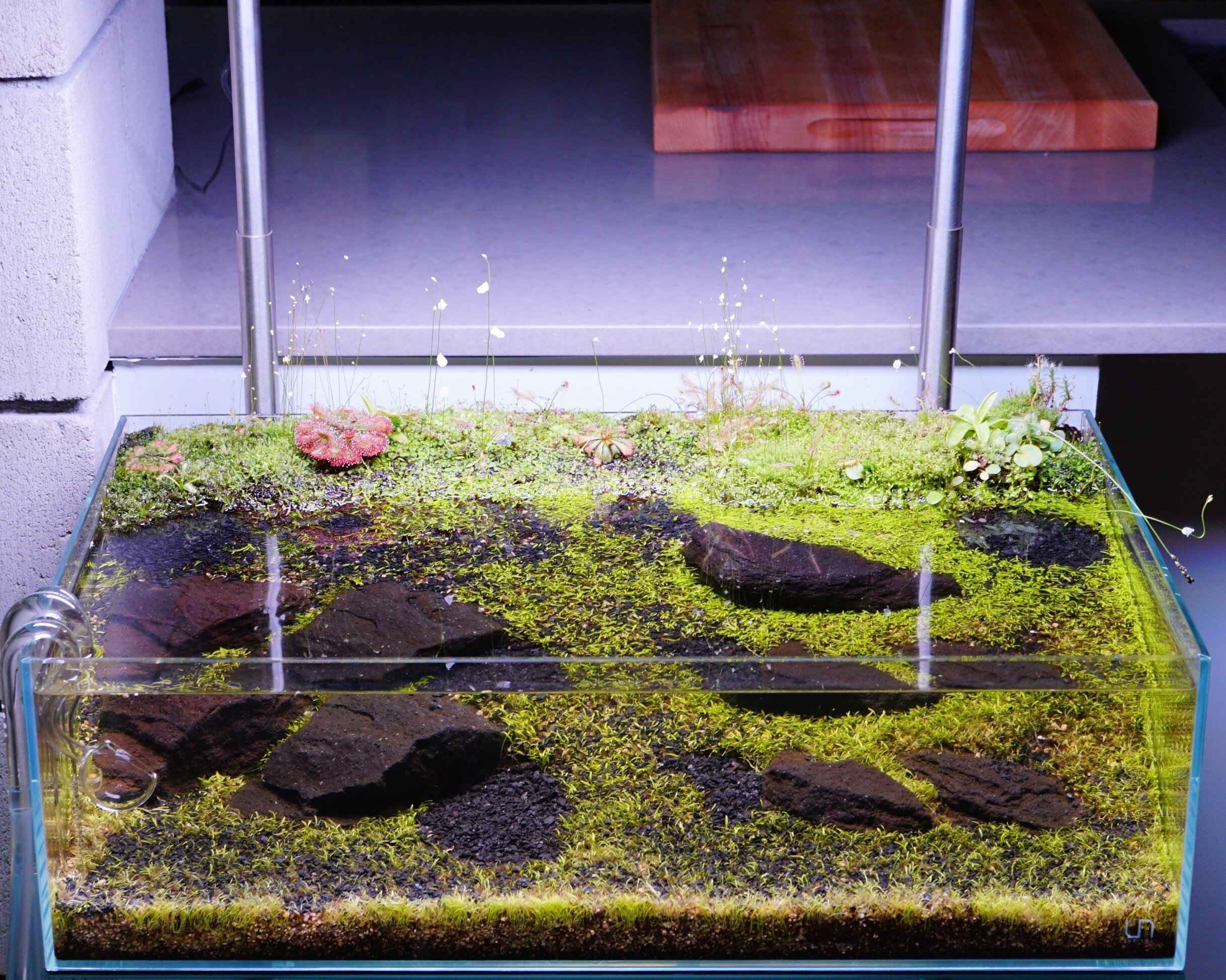 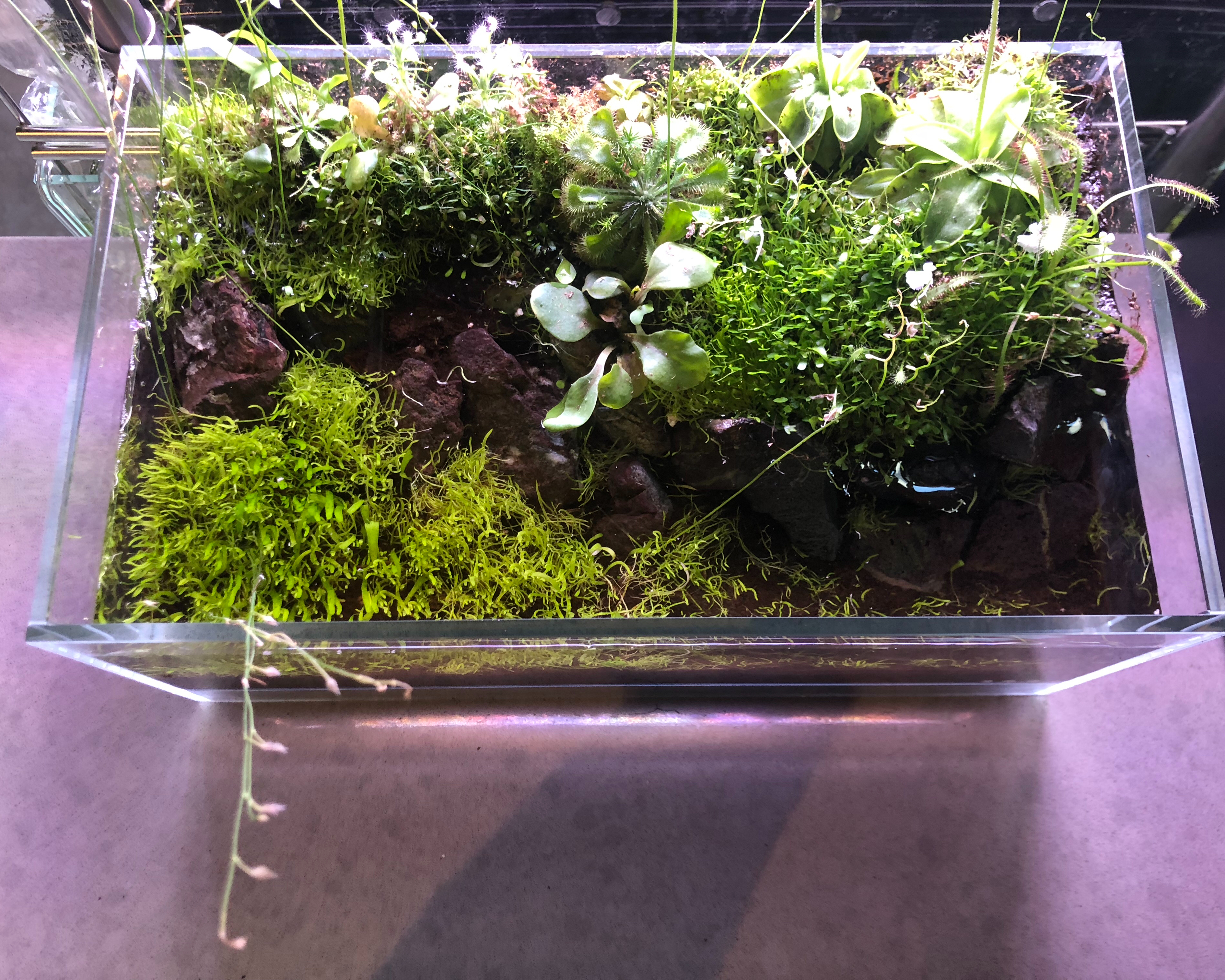 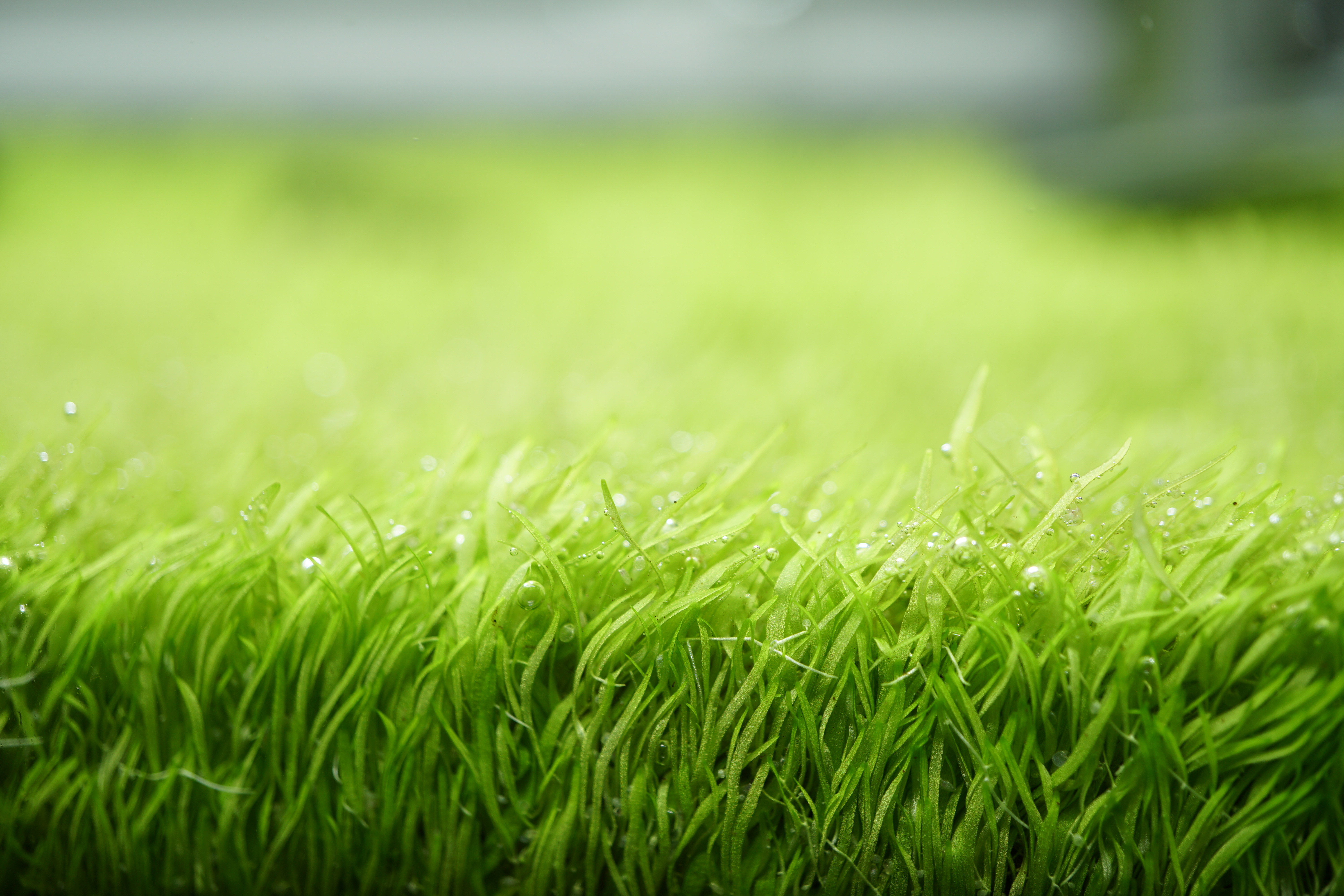 Utricularia Graminifolia is a rootless carnivorous bladderwort. In its natural environment, utricularia graminifolia grows terrestrially and submerged in nutrient poor swamps, bogs, and marshes. Contrary to the vast majority of common aquarium plants, utricularia graminifolia does not receive nutrients from the water column, but receives nutrition through it’s bladders. The bladders, hollow with a negative pressure inside, attract, capture, and digest prey. When an organism contacts the sensitive hairs of the trap, the hairs act as a lever mechanism, creating the force of impact and bending the pliable trap. This breaks the watertight seal and vacuums the organism into the trap within fractions of a second. The term organism consists of, but not limited to, various types of animals and algae such as rotifers, rhizopods, copepods, cladoceran, nematodes, insects, cyanobacteria, chlorophyta, bacillariophyta, and euglenophyta. Digesting the organisms provides utricularia graminifolia a rich source of organic nitrogen and phosphorus.

The difficulty aquarists endure while growing utricularia graminifolia successfully most often occurs from a misunderstanding of the plant itself. Often times it’s grown similarly to other common aquarium carpeting plants. However, in theory, it should not be grown using traditional methods, but grown in a completely different manner. Utricularia graminifolia is not necessarily a carpeting plant and inherently prefers to be free floating. It’s capable of attaching itself naturally to substrates, rocks, or whatever other media it may encounter. Also, since it’s rootless, planting in a substrate, creates a false sense of rooting. The “roots” are actually the runners of the plant and the runners are what pins it within the substrate. If planted, utricularia graminifolia prefers an acidic environment in nutrient poor soil, rocks, or gravel. It prefers soft water, but will tolerate hard water, provided it’s acidic, and the easiest way to ensure an acidic environment is with the use of peat moss. Peat moss not only keeps the water acidic, but it provides many of the organisms to satisfy utricularia graminifolia’s dietary needs. Once established, the natural adhesiveness of the plant anchors it until it becomes too massive and extricates. Like it’s terrestrial cousins, utricularia graminifolia is sensitive to fertilizer. No fertilization is optimal, but it will withstand fertilization in a planted tank as long as an adequate amount of non utricularia plant mass exists. Indifferent to the addition of carbon dioxide, utricularia graminifolia doesn’t need it to flourish. However, carbon dioxide won’t hurt, it does not significantly change it’s growth rate or appearance. Medium to high light, acidic environment, and organisms is all it really needs.

Some quick example text to build on the card.

In this example the dry start method was applied for six weeks. During the dry start method, utricularia graminifolia is grown terrestrially in a high humidity environment. This allows the plant to flourish, shoot runners, and create a thick and healthy carpet. Initially, dry start or not, utricularia grows on top of itself rather than shooting runners. The plant grows in a clumpy fashion. It doesn’t have roots, so this poses a problem mentioned, and rectified in ensuing examples. Towards the end of the dry start period, the plant has grown significantly and the substrate is nearly covered with a thick and beautiful carnivorous carpet. Once, the aquarium is flooded with water, the plant continues to grow and continues to sporadically send runners throughout the substrate. Towards the end of the cycle ammonia starts to leach and this becomes the beginning of the death of a utricularia graminifolia carpet. The ammonia melts the utricularia, but from the bottom up, and it is not clearly visible since the utricularia has grown on top of itself. The rotting base goes unnoticed for quite some time potentially creating the common uprooting issue. Uprooting is where your carpet detaches itself from the substrate and begins to float. If fortunate enough that the carpet hasn’t uprooted, the melt will become apparent after a few trims. Trim after trim will slowly show the melting core since the majority of the healthy plant mass has been trimmed away. With the dry start method there is typically a noticeable amount of decaying utricularia graminifolia at the base of the carpet. While the dry start method appears to be the easiest way to grow utricularia, it is certainly the most deceiving and is not suitable for a long term carpet.

Two cups of tissue culture utricularia graminifolia were spliced in half, horizontally, and tied down to a stainless steel mesh structure filled with ADA Amazonia light. The utricularia graminifolia was placed towards the top of the aquarium and the water line fluctuated from above to below the utricularia graminifolia multiple times a day by an external pump. The idea was to promote the effect utricularia experiences in nature, by recreating an eb and flow tidal system. There were no fertilizers, nor carbon dioxide used to create this carpet. The utricularia filled in the crevices and began to creep along the stones. There was no uproot, nor melting using this method. The fluctuating tidal system filtered the ammonia from the top down. Since the utricularia was never planted into the substrate and was floating near the top of the aquarium it did not experience heavy doses of ammonia. The carpet flourished with ease.

A base layer of sphagnum peat moss, topped with gravel, and planted with utricularia graminifolia. No fertilizer, nor carbon dioxide is used in this aquarium. The carpet grew and spread rapidly, mostly due to the acidic, and nutrient poor, substrate which contained several species of organisms, copepods and various types of algae. The utricularia bladders, vacuum in the micro organisms, and subsequently digest, to supply the essential phosphorous and nitrogen needed for survival. The use of live organisms creates extremely thick blades and promotes utricularia graminifolia to flower. Flowering is an extremely rare occurrence for aquarists and improbable to occur using the traditional nature aquarium style of planting. Using peat moss as a substrate is the easiest and most natural way to grow utricularia graminifolia aquatically.

Utricularia Graminifolia was planted in ADA Amazonia. There was a 2 week dry start before the aquarium was flooded. Once flooded, regular trimming of the utricularia began to offset any base melting that may be occuring. For two months, the utricularia was trimmed as low as possible to promote an even carpet. Due to the sporadic nature of utricularia runners, waiting for the runners to penetrate the substrate takes quite a long time. The idea is to prevent the clumpy effect which can hide melting or become a catalyst for uprooting. Meanwhile, the utricularia graminifolia experiences a constant melting battle from the substrate leaching it’s nutrients. Melt was regularly brushed out with a fine paint brush and siphoned with an airline tubing. Since it adheres to the traditional planted tank methodology, this method is the most common style, yet the most time consuming and hardest way to grow utricularia graminifolia. To ensure this utricularia graminifolia a chance of survival, proceeding the cycling period, peat moss was injected into the substrate helping establish an acidic environment and organism colony so that the utricularia doesn’t die from starvation.

Considering all of the above mentioned methods, the Peat Moss Bog Method seems to be the most ideal for Utricularia Graminifolia. The less you do, the better this plant grows. It is ultimately a low-tech aquarium plant and quite possibly the easiest, as long as you keep in mind that this plant thrives in a n acidic enviroment, is averse to fertilization, and requires sufficient lighting and organisms for food.